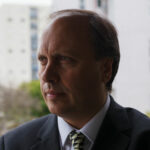 He has run his Leslabay Diseño studio for over twenty-five years, specialising in curating, designing and organising exhibitions, which have represented Spanish design throughout Europe, America and Asia.

He is a founding member of DiMad and creator of the Ibero-American Design Biennial. In 2015, he sat on the Jury for the National Design Awards. From 2015 to 2020, he was Editorial Director of Experimenta and since 2020 he has been Editorial Director of I+Diseño, a scientific publication produced by the University of Málaga.