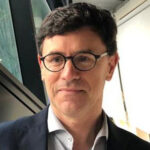 Joseba Erauskin has a degree in Industrial Engineering from Navarra University (1996) and an MBA from Mondragon University (2009).

In 2010, he joined Orona as Head of New Business Development, and between 2012 and 2016 he was responsible for the management of Ulahi Orona (Donostia), Orona CAAS (Burgos) and Orona Pecrés (Murcia). In 2016, he took over the management of Orona Zonas and since 2020 he has been Director of HQSE at Orona, S.Coop.

He is a member of the Strategic Committee of the Basque Ecodesign Center.