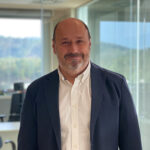 Javier Larrieta Zubia has a PhD in Industrial Engineering (2004) from the University of the Basque Country (UPV-EHU). He had previously graduated in Naval Engineering in 1990, and qualified as a Materials Handling Engineer (1993) at the same university.

In 1990 he joined Ormazabal as a materials specialist and has held the following posts: Laboratory Head (1993) and Director of Technology (2000). Since 2004, he has held the position of Managing Director of Ormazabal Corporate Technology, which is a member of the Basque Science, Technology and Innovation Network (RVCTI).

During his career, he has headed different technology transfer projects, both in R&D&I and industrial development, which resulted in different VELATIA (formerly Ormazabal Group) and special research and testing facilities.

He has been a member of the Basque Ecodesign Center Management Committee since 2011.