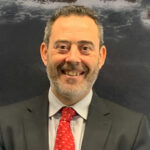 Law graduate from Deusto University, he practised as a lawyer for eight years, mainly in the field of administrative law and urban planning until 2003 when he joined the SPRILUR, S.A. public company, which reports to the Basque Government’s Department of Economic Development, Sustainability and the Environment.

From 2007 to 2015, he assumed different institutional responsibilities as Director of Urban Planning or Transport in Bizkaia Provincial Council, having participated in different administrative bodies, such as the Basque Country’s Regional Planning Committee (COTPV) or the Basque Transport Authority.

At SPRILUR, S.A., he has held different positions, such as Technician and Legal Director, and is currently the Deputy Director.