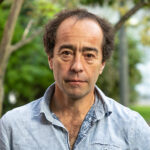 Carlos García Crespo, Bilbao, 06-03-1969, lives in Mondragon with his partner, son and daughter. He studied Industrial Engineering at Mondragon between 1987 and 1991 and Mechanical Engineering, specializing in Materials, at the Ecole Centrale de Nantes (1991-1993), where he received his doctorate in 1998. In his formative stage, he completed curricular and extracurricular internships in Ikerlan, Tekniker and Filex Industries. He speaks Spanish, Basque, French and English.

Since 1993 he has worked in the engineering faculty of Mondragon Unibertsitatea, Mondragon Goi Eskola Politeknikoa, first as a research professor specializing in metallic materials and their manufacturing technologies and integrated into the Manufacturing Department. In this department he led the implementation of the Group in Advanced Processes of shaping materials (of which he was coordinator between 1999 and 2007, directing 6 doctoral theses). Between May 2007 and December 2014 he was the Research and Transfer Coordinator of MGEP and since January 2015 he is the General Coordinator of MGEP.